When Serene Smalley hikes into the Koolau mountains, her goal is to kill as many plants as possible. Armed with a machete and syringes full of herbicide earlier this summer, her sights were set on the mule’s foot fern: a giant Jurassic-looking plant.

Smalley pulled out her cellphone, scrolling through a map app with hundreds of white pins. Each GPS marker pins the suspected location of a mule’s foot fern. A local conservationist spent weeks during the pandemic combing through satellite images and identifying the GPS coordinates of mule’s foot ferns on the mountain range. 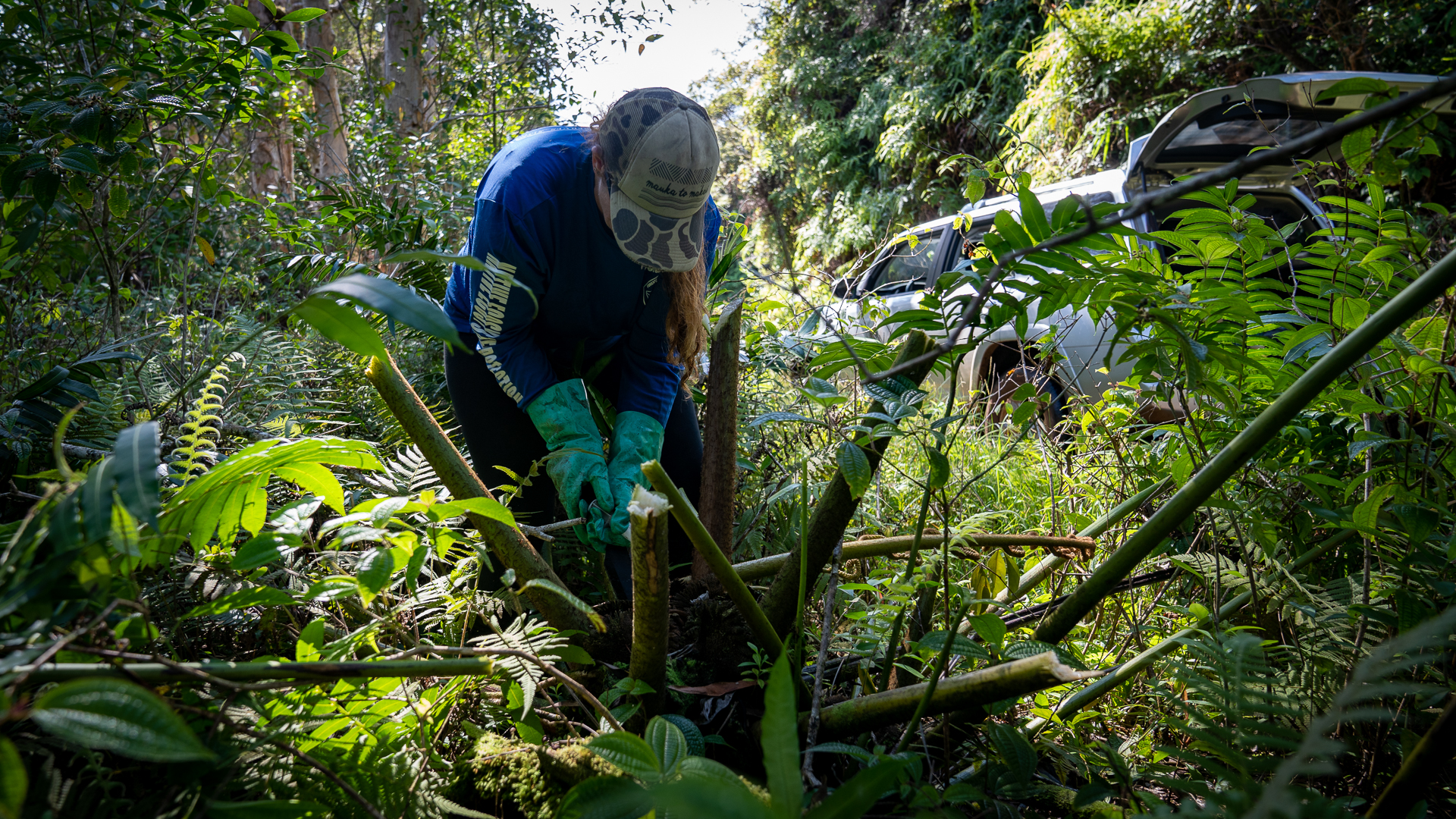 Serene Smalley uses a machete to fell branches of the fern before injecting a small amount of pesticide into the base of the plant.

To the untrained eye, a mule’s foot fern can look like a native plant, the hapuu fern. “The hapuu is very lacy and pretty,” she said, while the fond of the invasive fern is pointed. “Which reminds me of a snake.”

Some of the offending ferns are right off the Poamoho Ridge Trail near Wahiawa, but to reach others she will have to scale steep slopes in the rain. Smalley invested $60 in specialized shoes that look like hooves and have metal spikes embedded in the soles for traction. They were designed for fishermen and she uses duct tape to stabilize her ankles for the long hike ahead.

For six years Smalley has been scaling mountains, camping on remote peaks and navigating mudslides to kill thousands of non-native plants. She’s one of only about a dozen elite volunteers trusted by the state Department of Land and Natural Resources to assist in the dangerous task of eradicating invasive plants from the nearly 2.2 million acres of protected forests across the state. 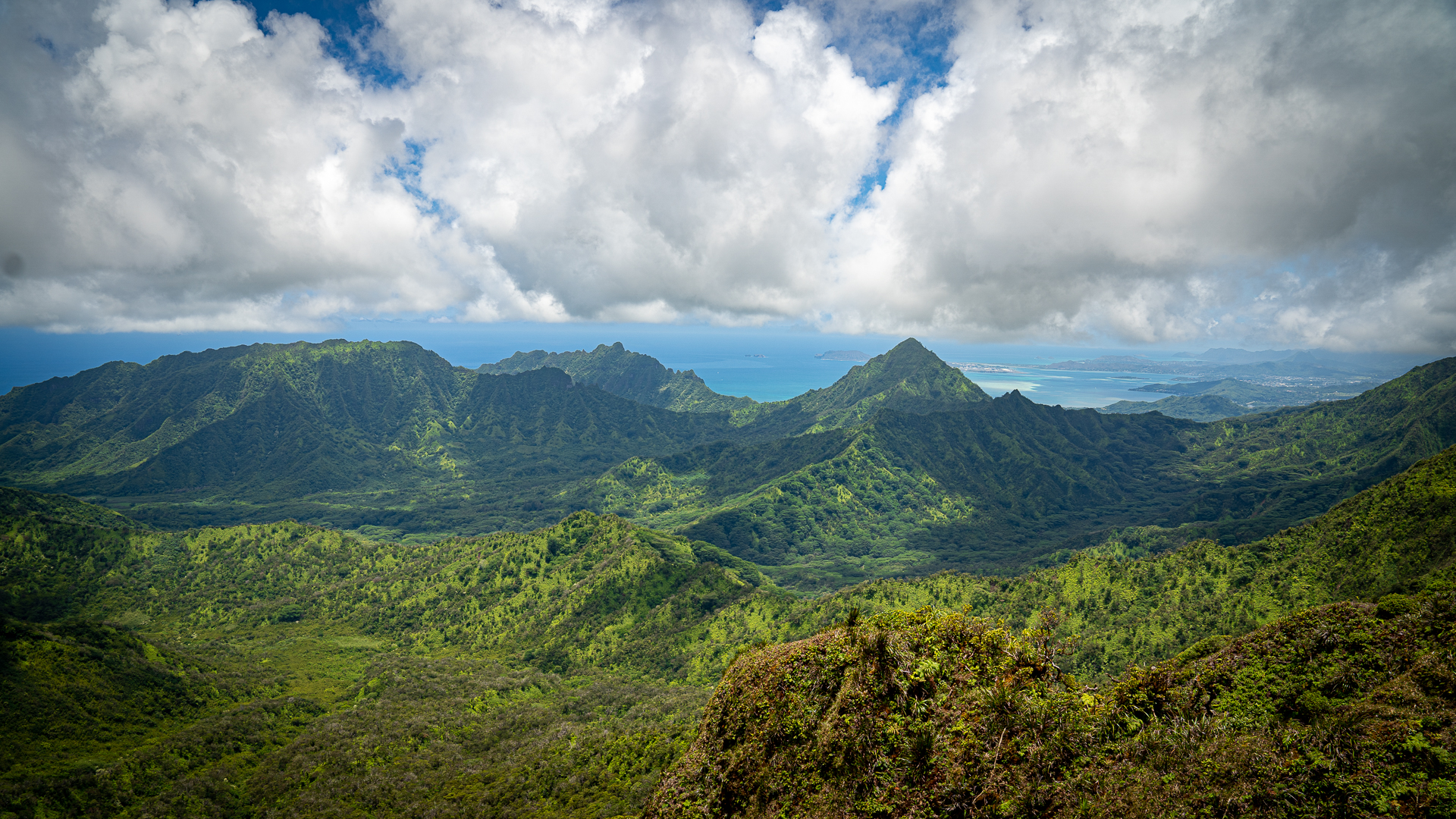 Watersheds provide clean drinking water, carbon sequestration and help prevent floods and droughts. A University of Hawaii study estimated the Koolau Range provides between $7.4 billion and $14 billion in value to the state.

These volunteers, along with hundreds of state employees, dozens of environmental groups and an army of local hunters are fighting an uphill battle to protect Hawaii’s forests — and Hawaii’s drinking water.

The efforts involve coordinating a diverse group of stakeholders that don’t always see eye-to-eye, expensive land acquisitions, millions of dollars in taxpayer-funded fencing and excursions to some of the most remote areas of the island to remove invasive plants.

All this work is amid a backdrop of climate change, which the Honolulu Board of Water supply says is a top threat to drinking water security on the island.

Hawaii’s population has almost doubled since statehood, and pre-pandemic the state was seeing a record number of visitors. But rainfall patterns have taken the opposite trajectory: decreasing at least 18% in the past 30 years, said state sustainability coordinator Danielle Bass.

Healthy forests could provide a one-two punch to the effects of climate change in Hawaii: sequestering carbon and allowing freshwater aquifers to recharge with rainfall.

“Without the necessary coordination and action, we risk a potential freshwater crisis for Hawaii’s future,” Bass said.